An inquiry into the conceptual basis of Design

Adolf Loos, the early 20th century Viennese architect and designer, said that an architect should be able to design anything from a spoon to a city. In the introduction to his book, Design is One, Massimo Vignelli reiterates this axiom. Vignelli himself was famous for saying, “if you can design one thing, you can design everything,” a philosophy he lived and designed by.
A design concept is an idea or a thought that forms the foundation of a design project. It is the force and identity behind a project’s progress and should be consistently consulted throughout every stage of its development. It is the only consistent element that follows a project from beginning to end and remains as important at the start as it is at the finish. In design field, the difference between a successful project and an average one is judged by the strength of its concept and whether its clarity remained and was kept consistent throughout. The objective of this course is to explore the creative mind-set of students. The project for this course will consist of three wholly integrated and conjunctive parts, each advancing in scale from the next, but each subtending from the same conceptual over-view. has an undergraduate degree in Architecture from Indubhai Parekh school of architecture, Rajkot and Dual Master’s degree in Interior and Furniture design from FIDI, Italy. She has 8 years of progressive international experience in the Architecture and Interior Design field. Currently, she is the principal designer at ‘studiominimus’ – an interior design studio based in Vadodara. 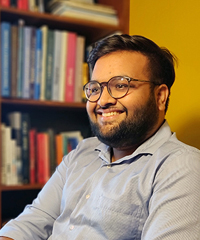