This course is developed with the help of the Kerala Institute of Local Administration (KILA). KILA is the collaborating partner institute for this course. This study will assess the urban vulnerability and the various initiatives of climate resilience adopted by the various urban actors and stakeholders in Kerala. According to one estimate, the level of urbanization in the state is expected to reach 92 per cent by the year 2030. It is at present 48 per cent, much higher than the national average. Kerala is primarily a coastal region with a higher population density, the large urban agglomerations such as Kochi, Trivandrum, Thrissur, Kollam etc. are more at risk of coastal hazards related to climate change. Due to the rapid urban expansions of built-up areas, land surface temperature has been increasing and the evidence shows over-exploited groundwater conditions. The recent floods of 2018 devastated major urban centres in the state leaving urban planning at the crossroads for both the policymakers and urban planners. There is an urgent need to innovate planning interventions and make the urban community resilient to these environmental and climate change-related risks. 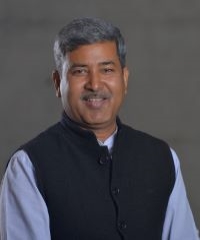 with over 20 years of experience is an associate professor at CEPT University, Ahmedabad. He holds a PhD degree in Urban Geography from JNU, New Delhi and had studied Urban and Regional Planning at CEPT University. Dr Roy was awarded a Canadian Studies Doctoral Fellowship for his PhD and was affiliated with Dalhousie University, Halifax in Canada in the year 2002. He had also worked for the UNESCO Office in New Delhi as the National Coordinator for the Indian Heritage Cities Network programme before joining CEPT University in the year 2009. His research papers have been published in national and international journals. He has published two books and is currently working on another one on planning education in the global south. Some of his research interests are urbanization in South Asia, Himalayan urbanism, environment and urbanisation linkages and urban informalities